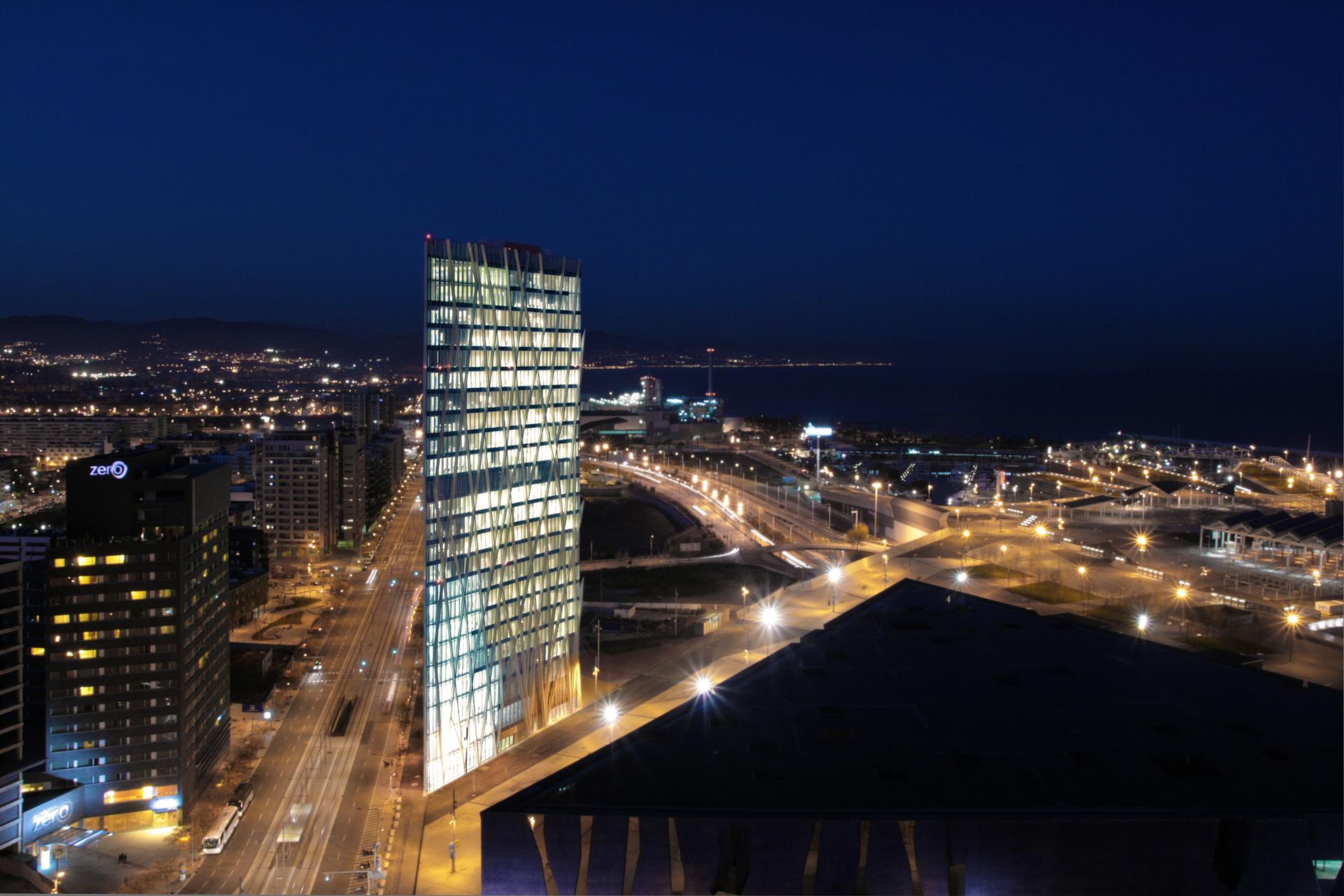 The new Telefónica Diagonal ZeroZero Tower was defined by Jaques Herzog as the 'minaret that the Forum building needed'. It is a 110-metre high tower, adjacent to this building, situated at number zero on Avenida Diagonal in Barcelona.

The position of the tower is exceptional because it is situated at the beginning of the Diagonal avenue, is very visible from the city and the coast, and is on the fringe of the consolidated part of the city and the large public spaces in the Fórum area. On the other hand, its immediate environs include isolated buildings in a context of people changing trains and several uses that make up a metropolitan centre and a local environment that is still being formed.

It is a contextual tower that expresses these circumstances in a proposal with a two-fold meaning: a tower that is close but also distant - according to the two types of scales that this type of building has to solve. Using the urban directrices that form the perimeter of the plot as generatrices for the project, it is presented as a trapezoidal prism, acute and slim, with a clean and serene shape, lightweight and with whitish windows, with transparency that offers a glimpse of dynamic and varied volumes responding to different specifications of the interior programme and which are connected with the different heights of the neighbouring buildings. The exterior shape is in keeping with the city and the view from afar; and the interior shapes are in keeping with their functions and the close-up view.

The programme for the tower has a very important public part which will connect it to urban life and which the projects takes advantage of in order to make the building very passable. This programme that is open to the public is on the ground floor which is actually developed in three interrelated levels, around a 30 m high atrium, which follows the slope of the neighbouring Plaza Fórum. This direct physical and visual continuity with the city will enable the tower to be part of citizens' activities and will enable citizens to take part in the building's activity and enjoy it.

In the interior of the building there are four particular spaces which generate a varied interior experience and revitalise the building despite being a relatively conventional corporate building programme: the atrium in the main hall, which opens up towards the Diagonal avenue; an atrium on the 17th floor, which reaches the top of the building, facing the Maresme Mediterranean coast; the terrace and the double space for the Board Room, situated on the 23rd floor; and the auditorium with room for 350 people, which takes up two floors and is divided into stalls and two amphitheatres which can be made independent and operate autonomously and simultaneously for smaller groups.

The floors for offices are bright, making use of the adopted structural system and the classic tube-in-tube scheme, with a central load-bearing concrete core and a perimeter structures on the façade. This perimeter structure is divided into two parts: very slim and slender internal steel pillars that operate by compression, and external steel elements that solve the horizontal and torsion stress. They are present on the façade as rhomboidal framework that meets the static requirements of each part of the building, with a higher concentration of resistance elements in the lower parts and lower concentration in the upper parts. The floor slabs are solid concrete slabs that transmit horizontal stress to the central core.

The façade is made up of a modular curtain wall with white aluminium and extra light glass periphery, partially silk screen printed, following a vertical pattern that highlights the slenderness of the building. In conjunction with the internal structure, set out every 1.35 m, and the external structure, this silk screen printing contributes to spreading sunlight and controlling dazzle, generating interiors with high quality perception.

LIGHTING IN THE ATRIUMS

The ZeroZero luminaire has been specially designed for the two atriums in the Telefónica Diagonal ZeroZero Tower in Barcelona, but with the aim of filling a space that was empty in the range of luminaires. Thanks to its minimalist design and stylised proportions, it integrates perfectly into the white pillars in the atriums and adapts to large spaces that must be lighted up all the way up.

During the day, when the luminaires are off, they are totally unnoticeable and give way to natural light that boosts the space. At night the luminaries come on and highlight the volume of both atriums, reinforcing their interior architecture.

This wall-mounted luminaire is made up of a white-lacquered (Ral 9010) steel base, in which the gear and fluorescent tubes are integrated. The diffuser, made of opal white extruded polycarbonate, protects the lamps and provides high visual comfort. Each wall-mounted luminaire has two end covers, which make it dust-proof and give the product consistency, as well as enabling them to be installed in a continuous line. Each wall-mounted luminaire is equipped with 1 or 2 T5- HO 80W (840) cool white (4000ºK) fluorescent lamps, with high colour rendering (Ra = 85). There is a version of this luminaire that is equipped with emergency batteries lasting 1 hour, to signal emergency exits.

The luminaire's product family is made up of combinations of the base module for different situations (hanging, standing, watertight), dimensions (modular or in a continuous line) and configurations (single, double or triple). 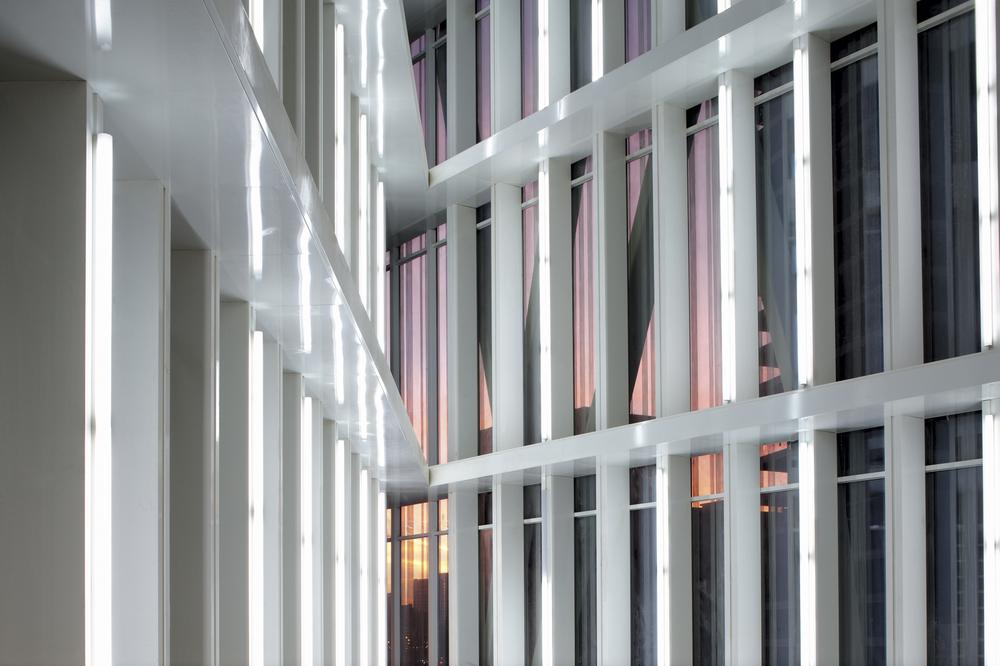 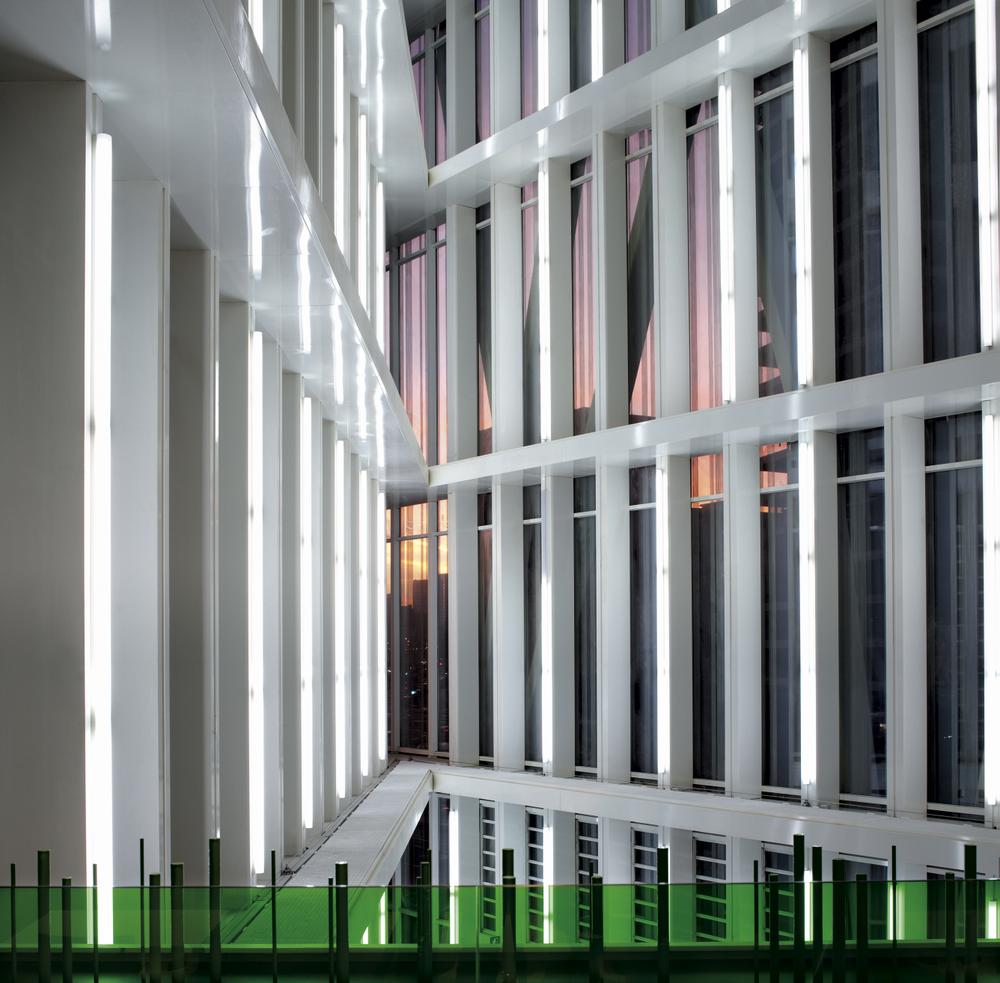 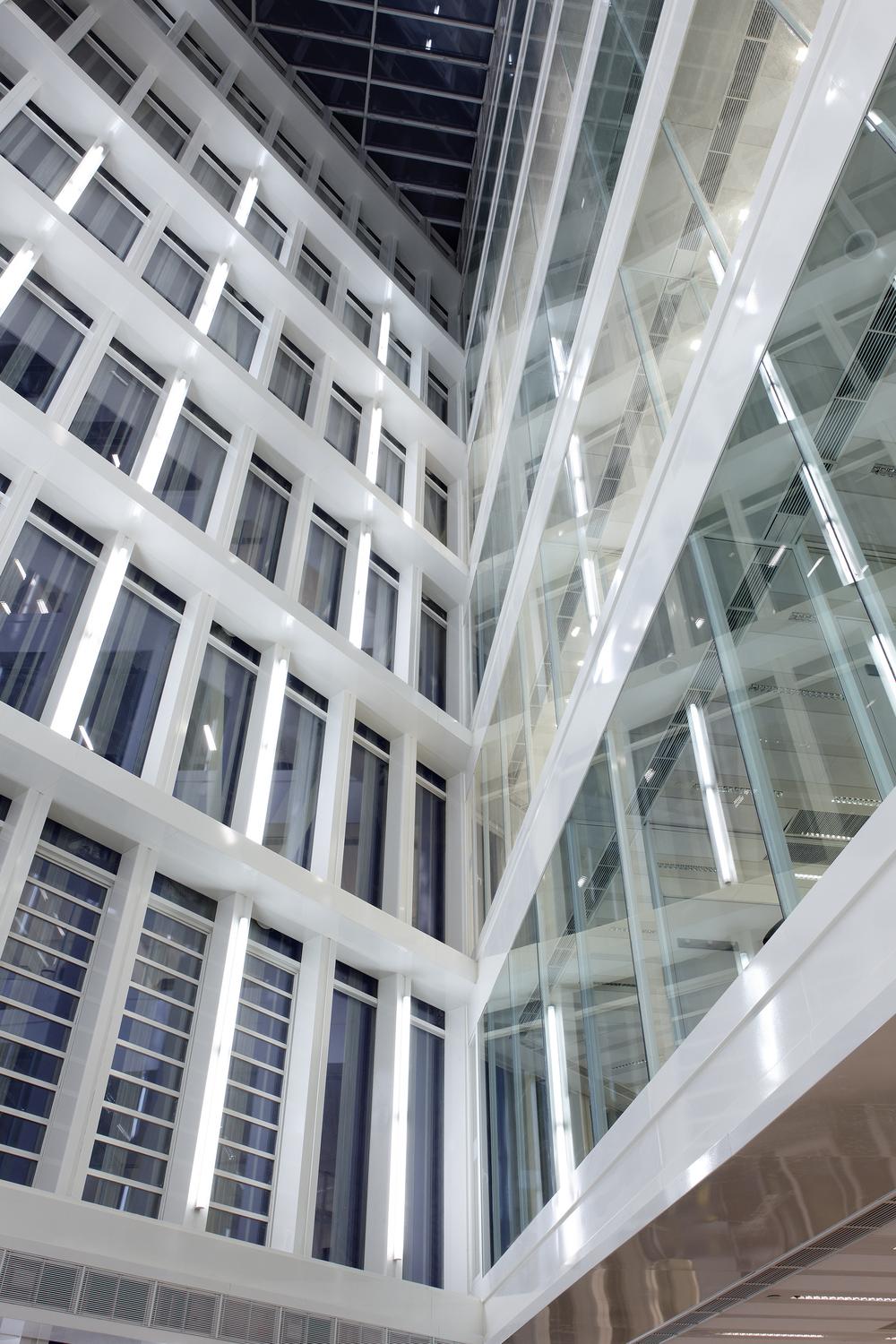 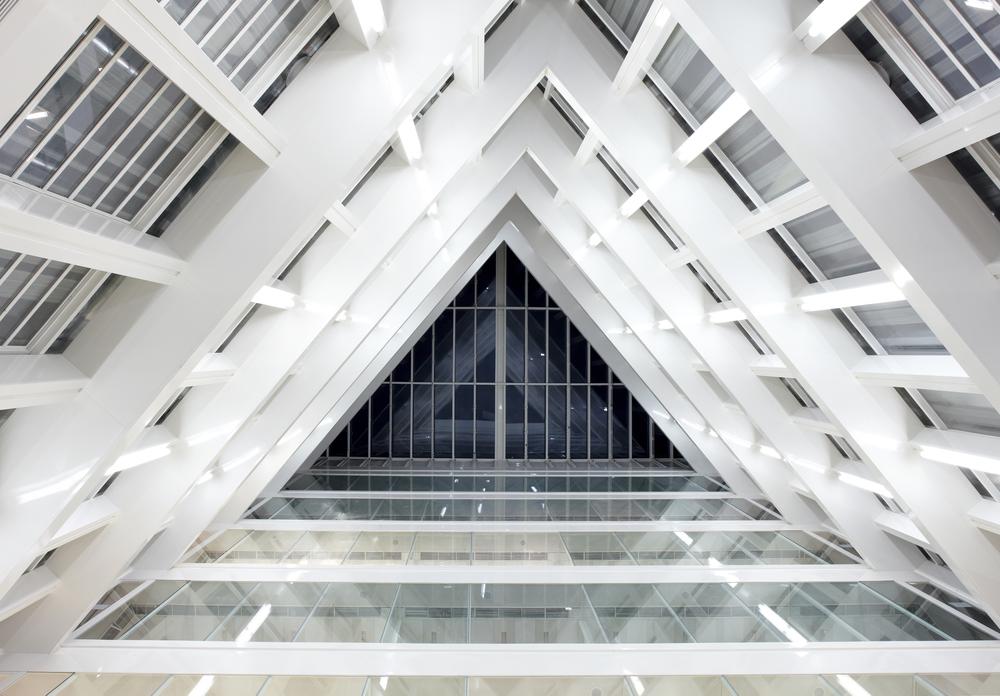 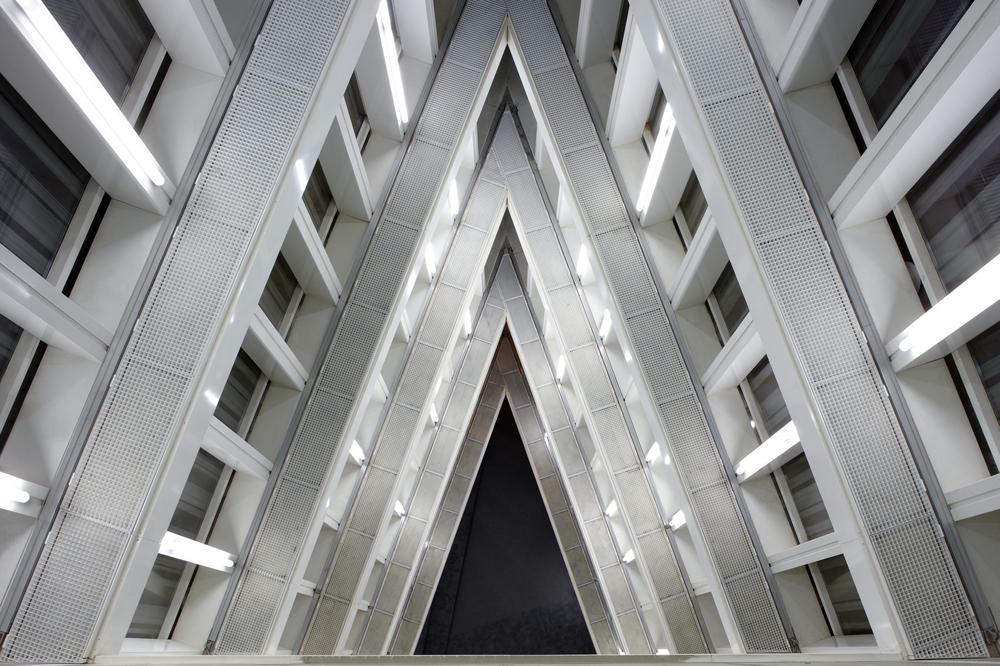 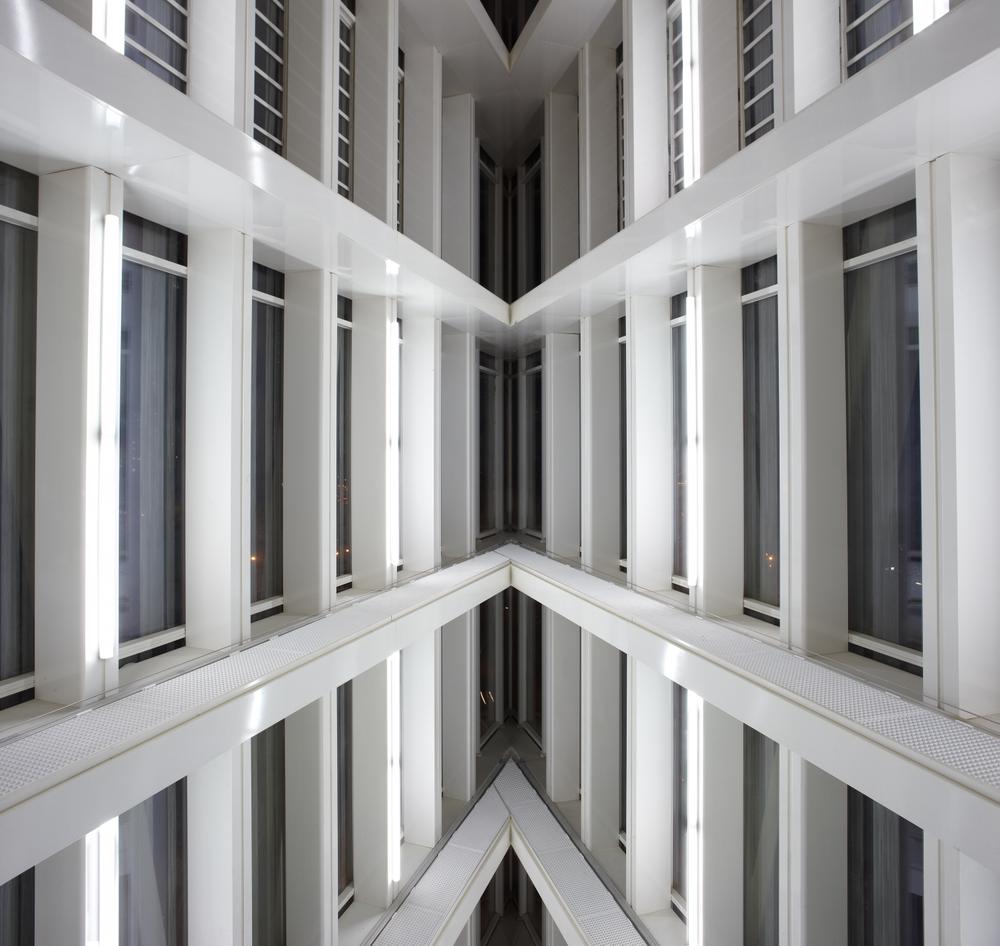 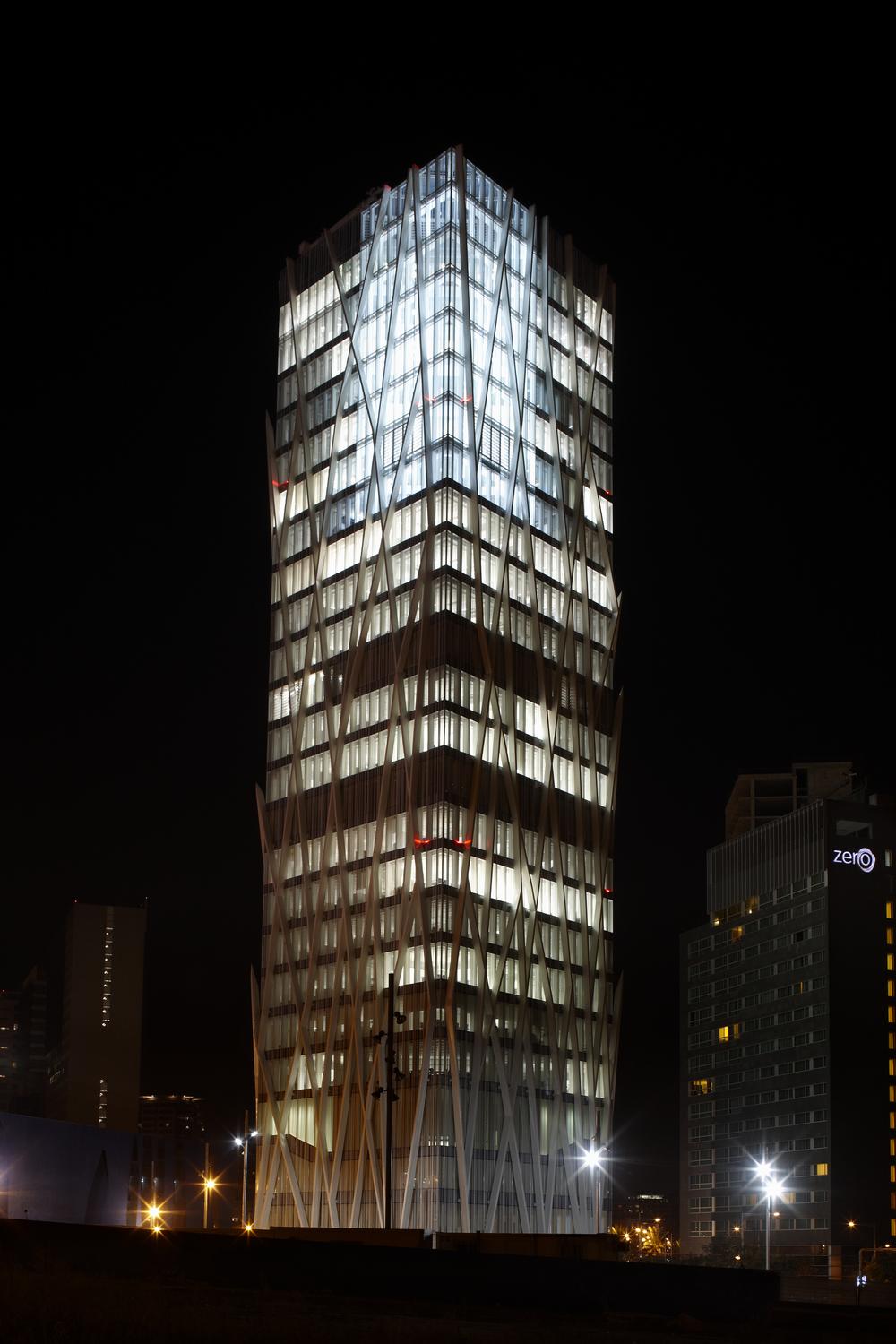 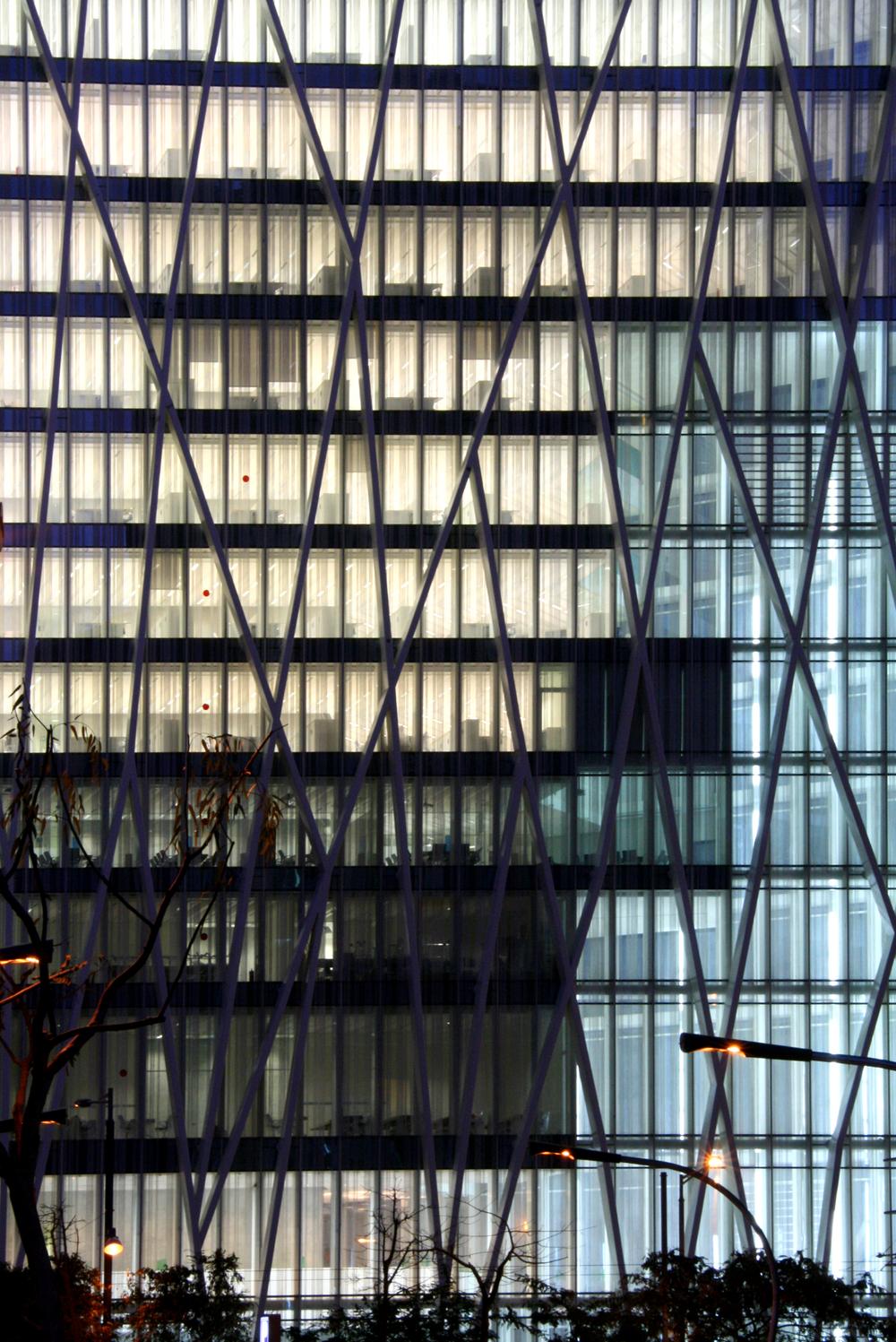 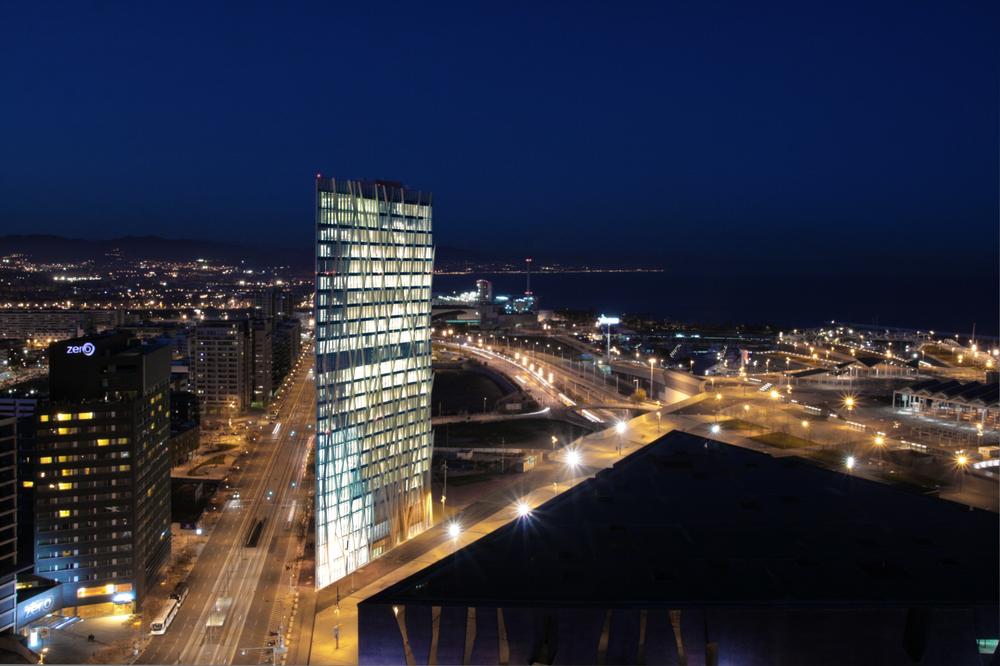