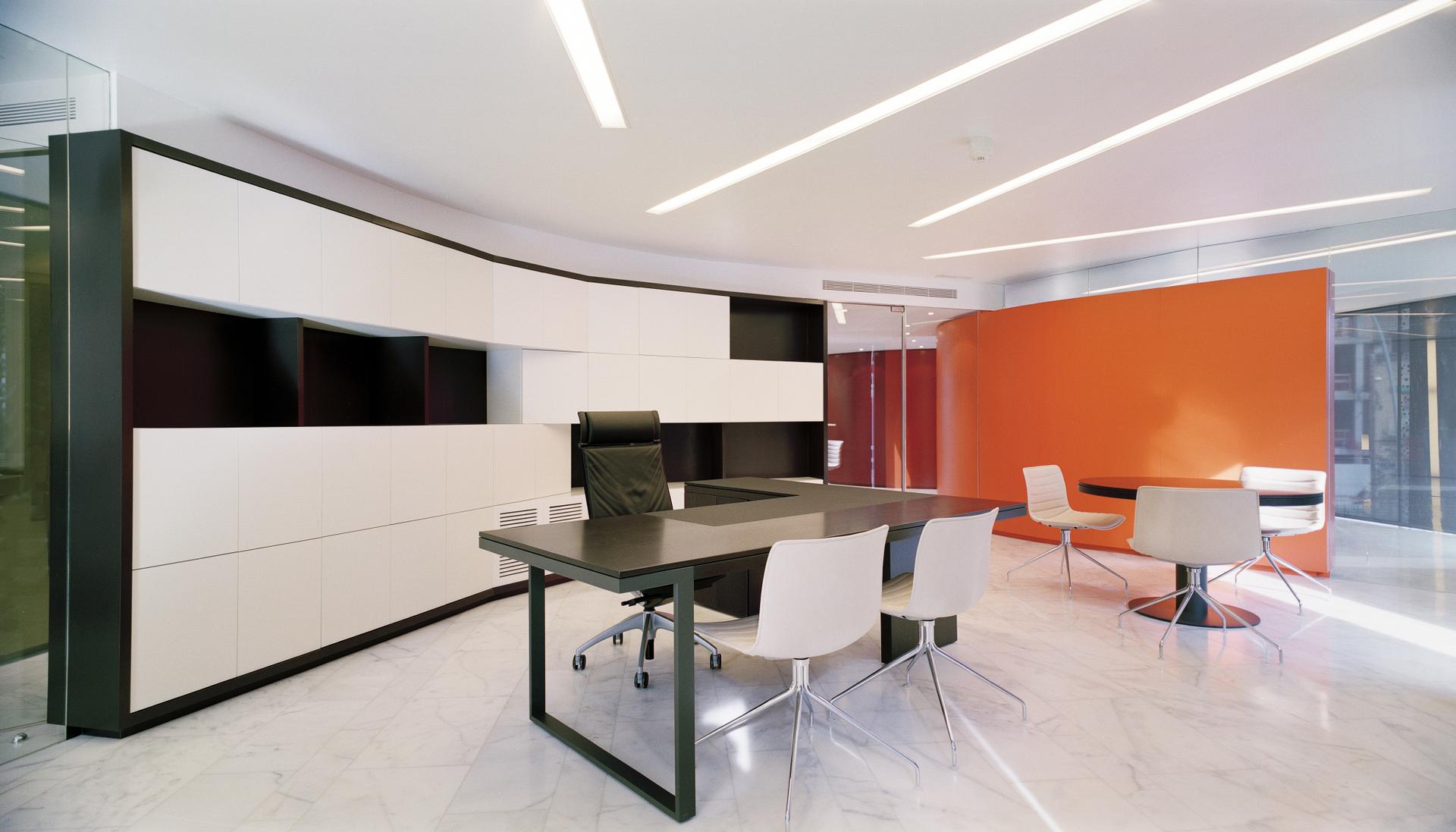 Fitting out and location

The new headquarters are located in newly constructed premises in a central area of the city, and comprise a ground floor of 650 square meters and a first floor of 350 square meters.   The building has a good relationship with its exterior through the large openings in its facade, and through which it obtains good natural illumination, as well as the company having a significant physical presence in the city.

As regards the fitting out requirements the following were requested:

3 management offices, 1 boardroom, the various claims, accountancy, business and IT departments, common spaces for personnel as well as areas designed for the attention (not medical) of policy holders.  The office capacity is for a staff of 30-35 people with a boardroom and meeting room for 20 people.

The desire for natural light to reach every corner of the building, the contact with the street, the open character of the different spaces with their blurred edges, the search for the exterior and interior visual elements to enrich the passageways and various work spaces materialises through the transparency and lightness as an element of connection, proximity and communication; and the consolidation, with the materials, the light, the colours and the relationship between them, of a space that with subtle work on the details, is sincere, flexible, singular, comfortable and above all human.

Once the access to the company is established through the main lobby and the staircase - which is the only link to the first floor - in line with the above criteria, the work spaces were established in the areas with maximum  natural light and relationship to the exterior, leaving the spaces for closed use such as the toilets, changing rooms and stores in the darker areas.   Two types of passageway have been created:  one internal for the personnel that connects all the departments together, and one external, for use by both the staff and any policy holders or visitors, and which gives access through the main entrance hall to the various departments, such as to the first floor, the toilets or to the meeting room.

All the furnishings are specially designed, as they are an element which, together with the glass, is used to organise the different spaces and the separation between them.  For closing in the toilets, changing rooms and stores partitions are used.   It has been possible to open some skylights in the existing light roofing in the room where the commercial and IT department is located, with the purpose of introducing natural light to the spaces.

The 30 m glass partition stands out as a coordinating element of the various spaces, and which acts as a sound barrier between the different departments, passageways and public access areas; and also partitions the meeting and policy holders' attention room on this floor.

Transparent vinyl with orange and red stripes has been installed within the glass, this creates a visual filter from the public areas, but continues to allow the team that makes up the company to be seen, as well as the view to the exterior. It also allows the corresponding entrance of natural light, which mixed with the coloured vinyls, gives a very interesting lighting atmosphere in the interior lobbies.

The exterior facade was sealed with the criterion of achieving the maximum transparency from both the exterior and interior.  On this floor a surround has been made using the furnishings which overcomes the exterior difference in the pavement level; and, at the same time, together with the sign, allows the profile section that supports the glass to be hidden.

To give privacy to the work stations without giving up the exterior view a translucent vinyl filter has been applied, which has been designed with the collaboration of the plastic artist Mariona Vilaseca and the graphic designer Cristina Muñoz, the filter becomes an element which creates a dialogue with its environment -  exterior and interior.

The geometry of the main staircase body, the search for exterior views from the interior passageways, as well as the desire to allow natural light to reach all areas, has meant that the furnishings that divide the various offices and rooms required by the design are curved, with some floating elements that provide maximum freedom to the various spaces.   As for the lower floor, partitions are only used for enclosing the toilets and the office.  On this floor there was the determining factor of the low ceiling height (2.5 m), for this reason passageway areas have been used for fitting the air-conditioning equipment, as well as the installation passageways, which allows the maximum height available to be used in the offices.

The relationship with the exterior has also been considered on this floor, vertical supports have been removed, and the profile sections that seal off the facade have been hidden.  Only some windows that allow natural ventilation break the continuity of the glass in the interior, but they are hidden on the exterior facade.

The white paintwork of the perimeter boundaries is prominent, which is mixed with the white lacquer of the furniture that organises the various spaces.  Natural stone (basalt) is used on the pavement, which is laid in different formats on the lower floor, and a natural stone with the same formats (white Ibiza marble) on the first floor.     The interior profile sections, such as the structure and stair hand rail are made in white enamelled steel.  Both the access ramp handrail and the reception desk are manufactured with steel structures and covered in unpolished stainless steel sheet.

The same covering as used on each floor was used in the bathrooms and the changing rooms, and a 2x2 green ceramic tile covering has been used.   All the interior glass is transparent and laminated.  For the floors of the two offices white Zeus silestone has been used.  The facade is sealed with hidden extruded aluminium profile, and uses glass with an air gap without vertical profiles.  The curtain rods, the sign and the various exterior and interior finishes are produced in aluminium sheet which is lacquered on the outside and anodised on the inside.   The false ceiling, also painted white, is made of  plasterboard and alternates smooth sheets with sound absorbent sheets to reduce sound reverberation.

It was desired to use lighting as an extra element in the organisation of the project, which, at the same time as carrying out its basic function, would emphasise the relationships between the various work spaces.    Furthermore, lighting in the passageway areas, lobbies and connecting spaces was provided,as an element that, accompanied by applications of colour, would give them a singular atmosphere.  To this end tailored lighting was designed using the furnishings themselves (lobby and boardroom), and the false ceiling (lobby lights and curved lights of the main accesses), indirect hidden lights in the false ceiling and the Random light (Mooi) luminaires for the stairwell and the Eggy (Pilma) model for the meeting room and office area.

For general lighting of the work spaces the Filmed de Lamp model has been used, both on the ground floor and on the first, which allows continuous embedded sections to be made in the false ceiling, the Kubic, Konic, MiniKonic and square Ring models for the bathrooms, changing rooms and stores and the fixed Ring model for the passageway areas on the first floor.

At the time of selecting the accessories, the criteria to follow was to find models that took away as little as possible from the immediate appearance of the office.  For the tables the MH de Bordonabe model was used on the lower floor, and the MH+ model in the management offices and boardroom.   The wash stands are made in Montelli and are specially manufactured by the Feltax company.   The work seats are the Muga 2 de Akaba standard operator chairs with wheels, and the Alfombra de Arper  four legged chairs; in polypropylene for the office and upholstered in leather for the meeting room and lobby.  For the management offices and boardroom the office chairs with wheels are the Modus Open Up model, and the Alfombra in leather with four legs. 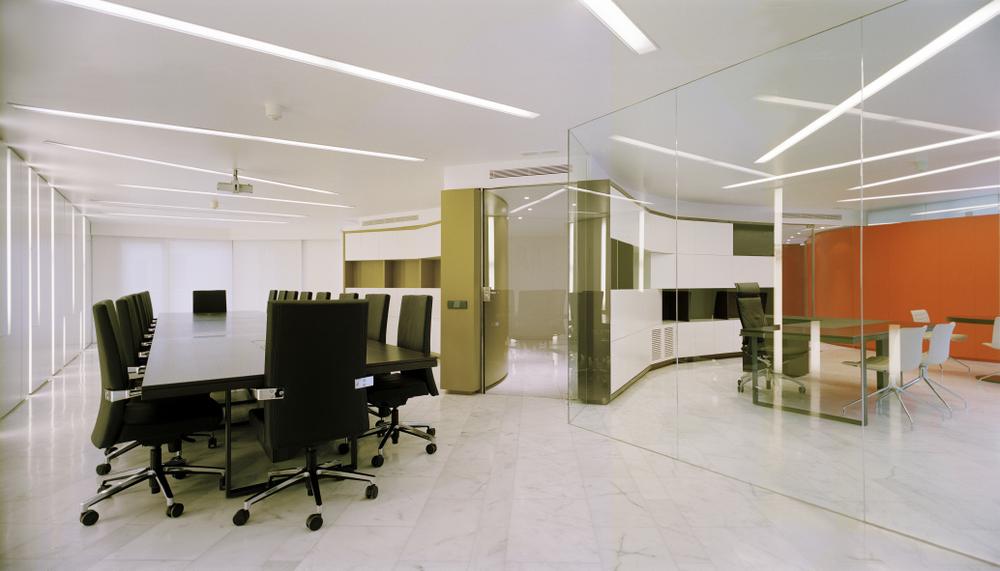 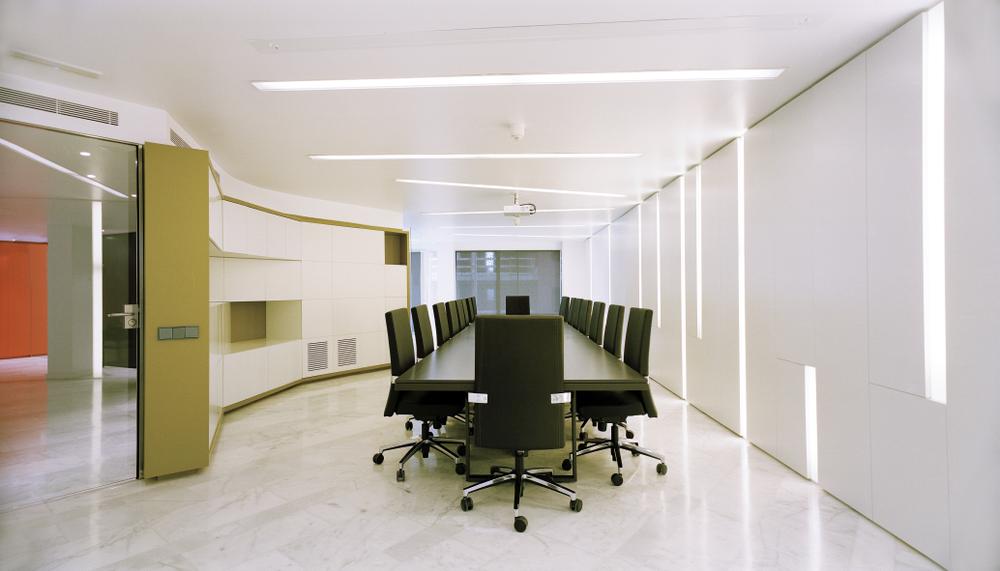 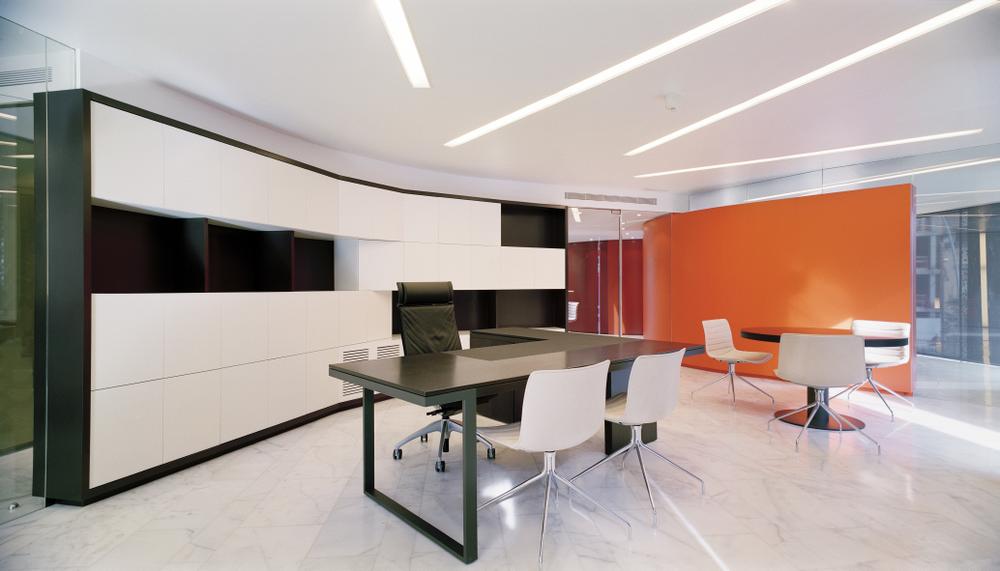 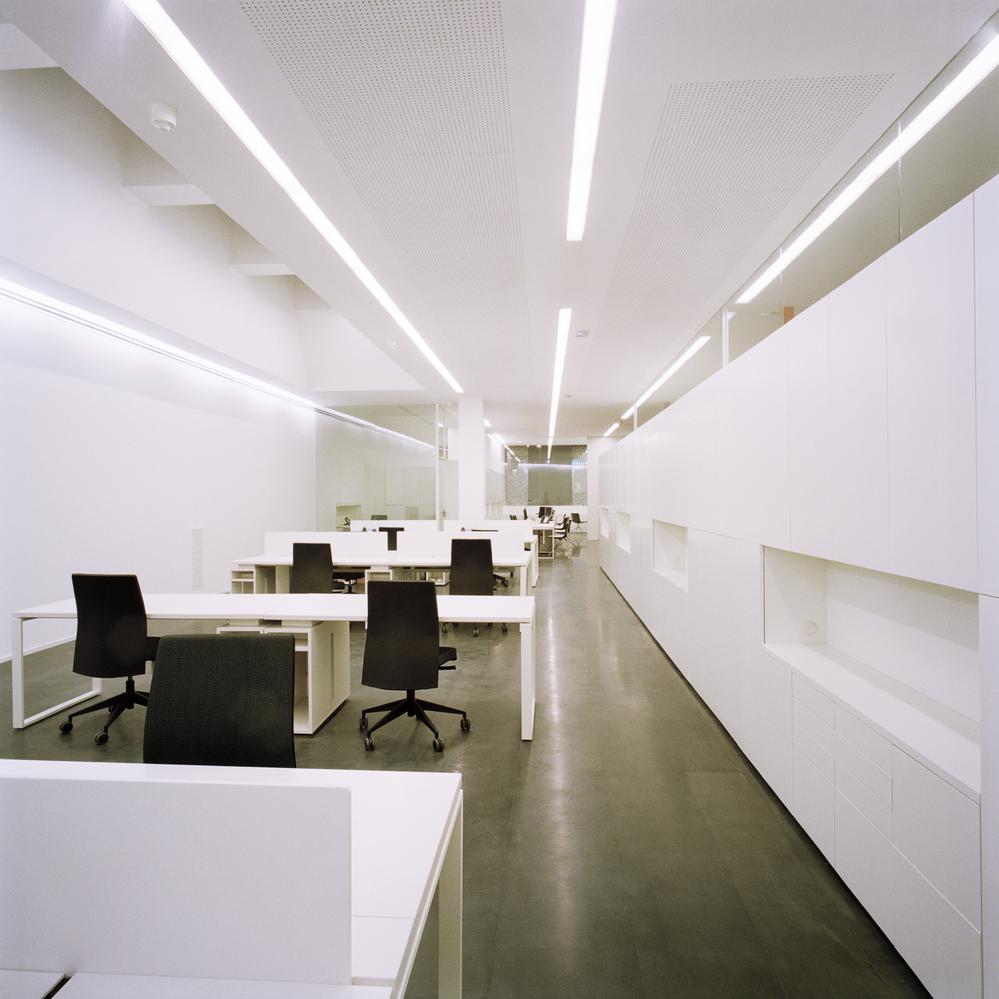 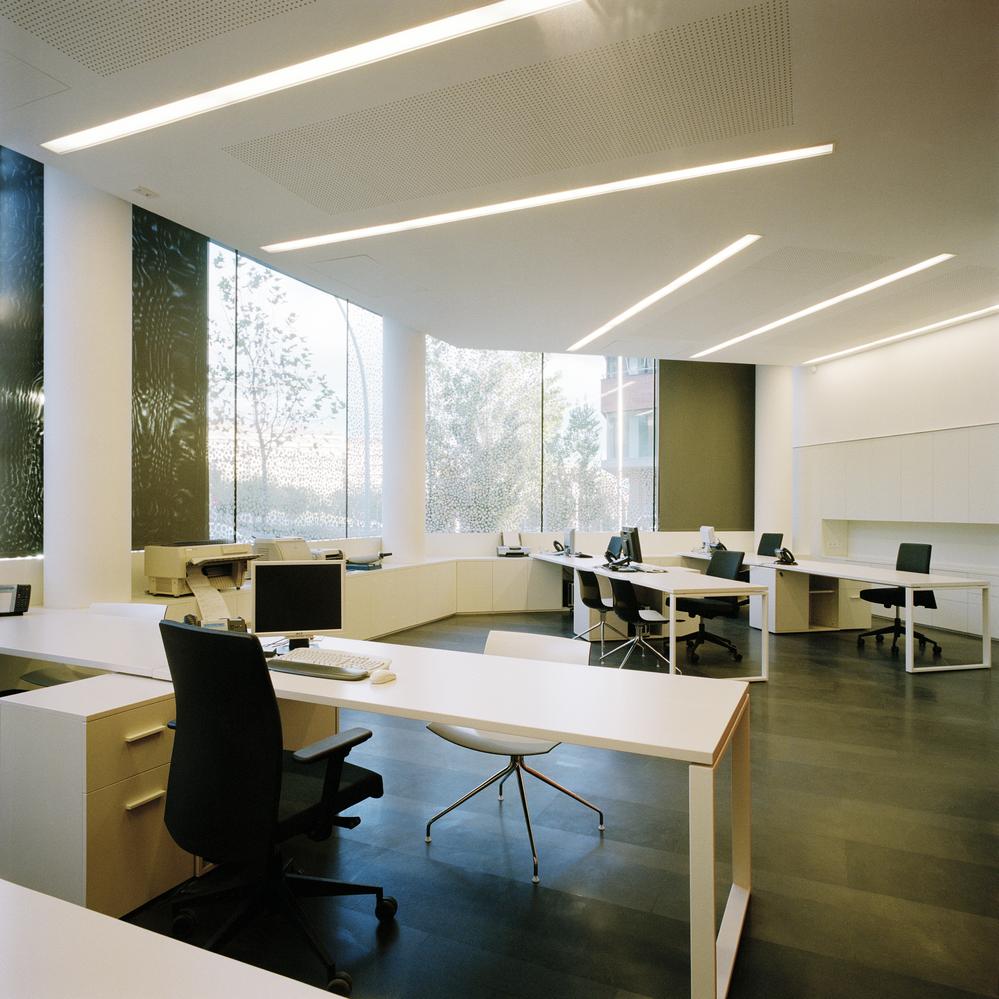 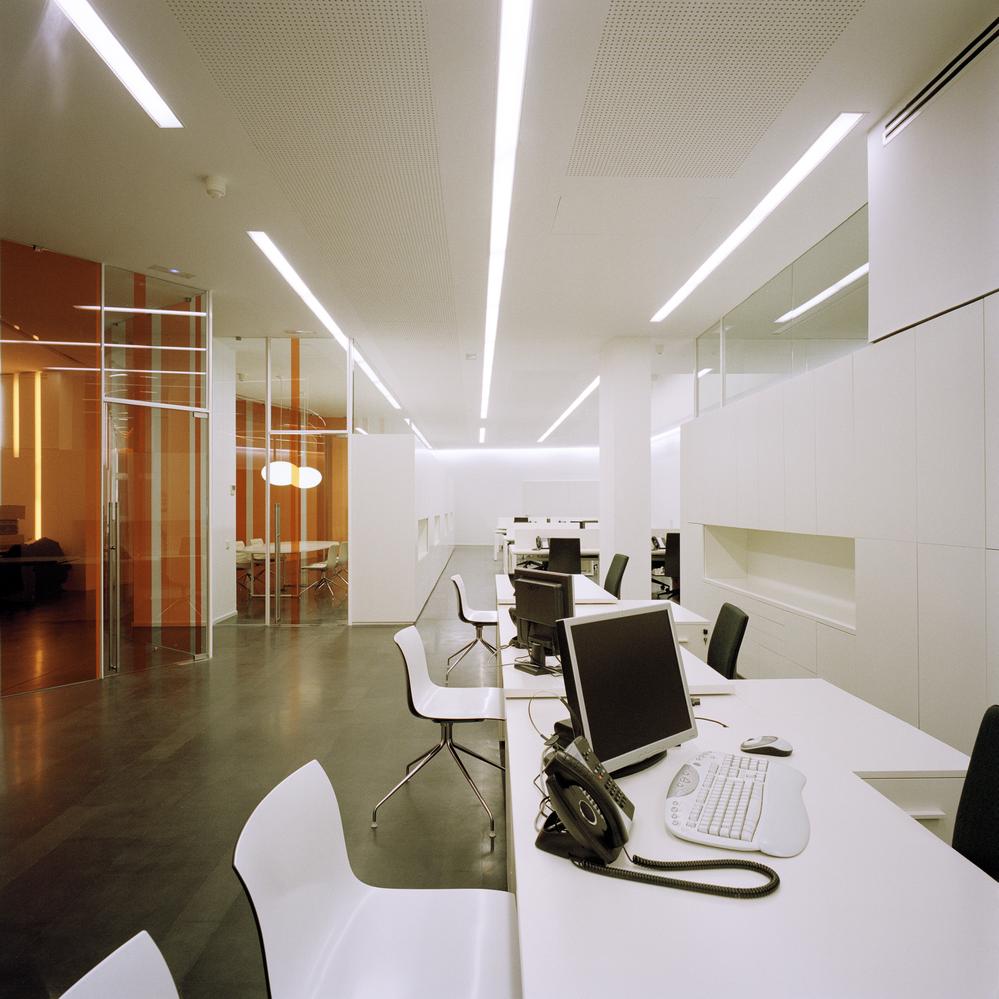